Please note that this page is in the process of being updated. We hope to have completed this shortly.

Character of the conservation area
The Canonbury Conservation Area was first designated in 1969 and extended in 2001. Historically, the area is part of the Elizabethan manor of Canonbury, centred on Canonbury House and its famous tower, but most of the area was developed in the late 18th and early 19th century. There are also a number of 20th century developments which contribute positively to the character and appearance of the Conservation Area. Canonbury Square is one of the earliest and finest squares in Islington. Semi-detached mid-Victorian villas predominate in many streets, with large gardens and mature trees. The New River Walk is an important feature of the area, which overall has a rare and special character and appearance, requiring sensitive policies for preservation and enhancement.

The Council’s design policies
The Council pays particular attention to design matters when considering planning applications, including for its own developments, to ensure that the character of the area is enhanced and protected. Development is also subject to all the other exisitng and established Council policies and planning standards. Full applications showing detailed proposals should be submitted for planning permission to be considered. The Council will not normally grant ‘outline’ planning permission in Conservation Areas. The following policies, adopted by the Council following public consulation, will be pursued by the Council to ensure the protection of the Conservation Area. New buildings should conform to the height, scale and proportions of the existing buildings in the immediate area, using materials sympathetic to the character of the area in terms of colour and texture. For extensions and refurbishment the Council will normally require the use of traditional materials, but the Council will also encourage good modern design and the sensitive use of high quality modern materials when appropriate.

Specific design features
Roof Extensions and dormers, chimney stacks and pots The existing roofs are very important to the character of the area. These include a variety of types such as exposed pitched roofs, mansards, gables and front parapets with hidden roofs. Many retain their original natural slate coverings and decorative features. The Council considers that the ad-hoc construction of roof extensions, dormers and rooflights can be very damaging to the appearance of the area and consent will not normally be given for alterations to roofs which are visible from the street, side streets or other public areas. New or enlarged dormers or rooflights on front or side slopes of exposed pitched roofs will not be permitted. Plant or tank rooms, air conditioning units or other services will not be allowed at roof level where it is visible from the street, including long views. The Council wishes to see existing chimney stacks and pots retained.

Side Extensions The existing gaps between detached, semi-detached and groups of villas afford pleasant views to trees and rear gardens and give Canonbury a spacious and distinctive character. The construction of large and high side extensions erodes this character and blocks the views of green and open spaces. Permission will only be given for new or replacement side extensions where they do not exceed three metres in height above ground level and are set back by at least three metres from the front corner of the house. Two storey extensions may be acceptable but only where they do not exceed two metres in width and leave a gap of at least three metres between the extension and the property boundary. All extensions should have a flat or low pitch roof hidden behind a horizontal front and side parapet.

The use of land
The predominant character of the Canonbury Conservation Area is residential, although there are shopping frontages on St. Paul’s Road, Essex Road and Canonbury Place which provide local services and are an important contribution to the character of the area. Generally the Council recognises that often the best use for a building is that which it was designed for and will seek to retain public houses, shops and workshops in appropriate uses which will not diminish their special interest. The removal of individual established uses within the Conservation Area will not be permitted where they contribute to the character of the area. Permission will not be granted for the over-intensification of residential use in conversation schemes.

What can be demolished?
The Council’s prior permission, known as Conservation Area Consent, is required to demolish almost any type of building or substantial part of a building in the area. A very large number of buildings in Canonbury are also Statutorily Listed by the Government for their national architectural and historic interest. Prior Listed Building Consent is needed for alterations to the interior or exterior of these buildings. The Council wishes to retain all structures and buildings in the area regardless of their age, which contribute positively to the area. Canonbury contains a wide variety of architectural styles with distinctive detailing. The Council will seek to preserve special features, such as historic shop and pub fronts, porticos, entrance steps and railings. Redevelopment will be considered only where this improves the appearance of the area.

How you can maintain your property
Many properties in the area still retain original architectural features both externally and internally. These include double hung timber vertical sliding sash windows, panelled front doors, fanlights with leaded lights, ornamental iron work to railings and balconies, stucco cornices and window surrounds, stone entrance steps, porticos and door cases. These special features increase the value of your property and contribute to the character of the area as a whole. Owners are therefore encouraged to maintain and repair the original features wherever possible. Where renewal is unavoidable or features are missing, the Council encourages owners to reinstate these with traditional materials and matching designs. Modern flat or neo-Georgian front doors, aluminium pivot windows or UPVC double-glazed sashes would look out of place and spoil the character of the area.
Existing brickwork, including chimney stacks, should be properly maintained and repointed and should not be painted or rendered. Gutters, hoppers and other rainwater goods need regular inspection. Water penetration and vegetation growth can result in expensive repairs. If you have any queries or would like more information on maintenance and repair, the Council’s Planning Department will be able to advise you on the best course of action.
Existing garages, stables and coach houses contribute to the character of the conservation area. Their external appearance should be retained.

Front areas The Council will not permit the filling in or covering over of front basement areas or the widening of front entrance steps. The council will resist the creation of hardstandings for vehicles in front gardens. Dustbins and meter enclosures should be discreetly located so as to be invisible from the street. New garages or car parks will not be allowed at the front or side of properties in the area.

Shopfronts Original historic shopfronts contribute to the character and appearance of the area and should be kept. New shops where permitted need to reflect traditional design and materials such as painted timber, iron and render/stucco. Natural aluminium is not acceptable. Full guidance is given in the Council’s Shopfront Design Guide.

Front boundary walls and railings Canonbury has a considerable variety of boundary treatments. Traditional railings, brick walls and hedges to front gardens and corner properties are an important feature of the streetscene. The Council will not give permission for the alteration or removal of original or traditional front walls and railings or their footings and will encourage owners to maintain and reinstate traditional designs. In Northampton Park the high stock brick walls with piers and stone copings should be retained and replicated where missing. The unusual rubble walls at 29-43 Wallace Road should also be kept.

Vents and flues The erection of vents and flues at the rear of commercial property can be harmful to amenity. Where possible existing chimney stacks should be used. Any new flues should be modest, appropriately located and painted a dark colour or enclosed in brickwork. Flues or vents on front elevations will not be permitted.

Advertisements and signs Signs and advertisements can detract from the visual amenity of the area and need to be appropriately designed and located. Internally illuminated signs will not normally be permitted. The Council will resist advertisements on the sides of buildings and take legal action against unauthorised hoardings and “estate agents” boards.

When planning permission is required
There are special controls over what requires planning permission in the Conservation Area and these have been strengthened by an Article 4 Direction which is in force. this means that planning permission is required for various minor external works which had previously been considered as ‘permitted development’.
The following is not an exhaustive list, but an indication of the sort of works which do require planning permission:
– alterations or extensions to roofs including chimney stacks and pots;
– extensions to the original house that are over 50 cubic metres in size;
– garden sheds, garages or outbuildings over 10 cubic metres in size;
– enlargement, improvement or alteration to elevations fronting the street, including alterations to front doors or windows;
– demolitiion, alterations or erection of front boundary walls, fences, railings, gates or dustbin enclosures;
– painting of previously unpainted brickwork;
– cladding any part of the outside of building with render, pebble-dash, stone, timber, plastic or tiles;
– satellite dishes;
– creation of hardstanding fronting the street.
If in doubt always ask the Planning Department first. Failure to obtain prior consent may involve owners in having to reinstate alterations, thus incurring extra cost. If your building is listed you will require prior listed building consent for internal and external alterations.

Paint colours External decorative plasterwork was originally painted off-white or in pastel colours, often to resemble stone. In Canonbury many stuccoed properties are traditionally painted pale grey (BS colours 00A01 and 10A03) and owners are encouraged to continue to reinstate this to achieve uniformity. Avoid vivid modern colours which will appear brash. Front doors were ususally painted in darker shades. Never paint previously unpainted brickwork.

Streets in the Conservation Area
Existing York stone paving, cobblestones, granite setts and kerbs and cast iron coal hole covers are important features and must be retained intact. Impressive areas of York stone paving remain in Pleasant Place, Canonbury Square and Tyndale Terrace and must be retained and where possible reinstated if missing. The raised pavements in St Paul’s Road and Canonbury Square are unusual features which must be kept. The New River Walk requires regular and careful attention to protect its architecture features and water quality. The Council would like to improve the quality of paving and street furniture in the area, subject to the availability of funds. On renewal, traditional designs of lampposts, bollards and other street furniture will be used, with traditional slab paving and granite kerbs. Old street name signs should be retained even if new signs are needed. Many Conservation Areas have their own Amenity Society or Association which is also represented on the Council’s Conservation and Design Panel and Committee. If you are interested in forming or joining such a group, please contact the Planning Department. 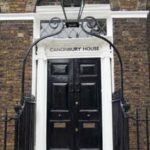 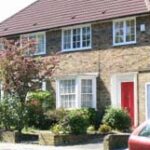 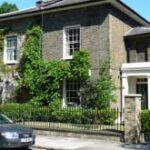 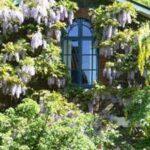 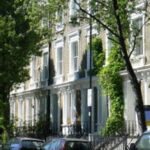 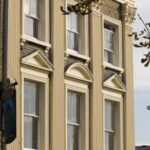 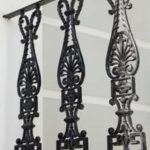